In a previous blog, I wrote the following: Enough with the hashtags, the vigils, the understanding, the calls for calm, for unity, for tolerance and enough of waiting. Yes, waiting.

I take no comfort from saying this, but it’s true: I told you so. And I wasn’t the only one.

And now, even as the bodies lie in the morgues of London and the critically injured fight for their lives, we begin the next period of waiting. Because make no mistake, in spite of the phenomenal efforts of the police and the security services, that’s what we are doing; waiting. Waiting for the next horror show to take part on the streets of our country, the next list of dead, the next stream of excuses and the next cries of ‘keep calm and carry on’ from politicians who are too scared to face up to the reality of what’s been happening to this country on their watch.

Well I’m sorry, I’ve had enough of that. Enough of bending over backwards for fear of offending, enough of hearing excuses and enough of waiting. Because it’s time to cry enough and start actually taking the fight to these bastards who skulk amongst us.

The obvious question of course, is how. And whilst it is fine to talk about long-term solutions such as increasing the number of armed police on our streets and giving the security services the tools they need, we need to start thinking short-term and to me the immediate answer is simple. It’s internment.

After all, if the security services are already all over these people and the ultimate aim is to deradicalise them anyway, why not get them off the streets into a secure location where Imams and other Islamic scholars can begin that process at no risk to the public?

You may think that’s a fanciful idea and totally at odds with the fundamental rule of law in that we are innocent until proven guilty but consider this. We have laws in this country which mean that if someone is in danger of causing harm to either themselves or others, they can be taken into custody and placed into a secure facility fairly quickly under the mental health act. Er… hello! Isn’t planning to butcher as many people as you can before blowing yourself up or being shot and killed slightly barking? Or does the fact that it’s being done in the name of some warped religious ideology render that law impotent?

The argument against Internment seems to focus on the bizarre notion that we’d be creating a British Guantanamo and/or driving more people into the arms of evil but to me, this is beyond laughable. Not least because whatever alternative we’ve been trying in the name of ‘tolerance’ clearly hasn’t been working has it. And besides, lest anyone forget, this isn’t about the average British Muslim, it’s about a group of raving fanatics who even our wonderful London Mayor says have nothing to do Islam. So how, or why, would the Muslim community in Britain have a problem with internment given that these barbarians are as much their enemy as anyones? More so in fact because they’re the poor souls who are having to endure the entirely unwarranted stares, suspicion and even abuse on the back of what is being carried out in the name of the religion they follow. That’s not fair, it’s not right and it’s not acceptable.

We are all in this together, that’s true. But we have to accept that we are fighting a war against an enemy for whom life has little or no meaning and if we ever to start thinking about winning that war, the time has come to send a message to the filth that seek to divide and destroy us that not only will they never win, but that we are coming for them.

All of us, and we’re coming hard. 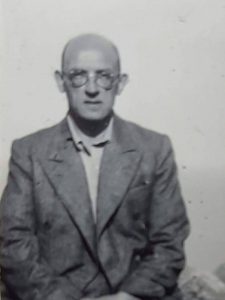 This is a picture of my late granddad. He was an ARP warden during the war and his beat was the East End of London which, for those that don’t know, was bombed pretty much constantly by the Germans during the second world war.

Almost every night, he would go out walking the streets making sure people were safe and reporting on bomb damage, sometimes even as the bombs were falling. After that he would go home, not knowing if his own house was still standing or his family still alive, before heading off to do a full-time shift as a porter at one of the big London markets. That went on right through the blitz.

I mention him now because in the wake of the terrorist attack in London yesterday, much is being made of the fact that we, as a nation, have a spirit which means that we will never be defeated by these cowards who are now seemingly hiding in our midst. And of course we won’t, just as we weren’t by the Nazi’s or the loathsome IRA.

Some call it the Dunkirk spirit, others refer to the ‘Keep calm and Carry On’ mantra which has become synonymous with our nation in recent years but whatever it is, we have it, in spades. And it will see us through these worrying sad times just as it always has.

However, there is a huge difference between the Britain we knew in the blitz and even during the reign of terror imposed on us by the likes of Martin McGuinness in the 70’s and 80’s and it is becoming an increasing concern to me. It’s nothing to do with government, immigrants or even religion, it is to do with our individual selves. Or more specifically, what kind of Brits we are.

Much is being made of the selfish acts carried out on Westminster Bridge yesterday, and quite rightly so, but how many simply people walked by? How many were so obsessed with taking photo’s of the carnage lying on the road in front of them that they failed to offer a single ounce of compassion let alone help? The answer is too many. Far too many.

OK, I know there will be those who in moments of panic, default to their phones and others who, handcuffed by fear or even language, will have simply stood transfixed. But there were others who actively moved around taking pictures or film to upload onto social media or better still, sell for cold hard cash.

I won’t even ask how those people sleep at night because chances are, they will sleep just as they always sleep. But the fact that this mentality exists at all saddens me greatly because this isn’t the country that my granddad put his life at risk to protect.

Instead, we have become a nation which has a cancer running through it. And that cancer takes the form of selfishness. Far too many people these days have little or no concept of either personal responsibility, duty or even basic courtesy whilst both the law and authority have come to be regarded almost universally as some kind of enemy (until they need them of course).

Policemen, medics and even firemen are all too frequently abused and even attacked whilst simply trying to do their jobs whilst our servicemen and women, both serving and veterans, are regarded in some quarters as a cross between vermin and lepers. Marine A being a case in point.

Yet these are public servants. Their job, vocation even, is to protect, defend and aid society, our society. And the fact that they do that, by choice, should be applauded, not ignored. After all, can you, hand on heart, say that you would walk toward danger rather than run away from it? Yet that is what they do, some of them do it every single working day.

But we should not simply respect these people, we should aspire to be like them. For the way to defeat terrorism isn’t simply to ‘keep calm and carry on, because all that does is invite more of the same. The way to win the war on terror is to be better than those who wish to harm us.  And that’s what we have to do, all of us, be better. Better at caring, better at helping and most of all, be better at being citizens.