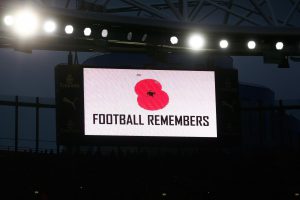 As you must be aware by now, FIFA, in their infinite wisdom (sic) have decided to punish the FA’s of the four home nations for offences relating to the display of the Poppy on Armistice Day.

Now you don’t need me to go into the grubby details because they are no longer of any importance. What is important however, is what happens next. For it surely goes without saying that England, Scotland, Wales and Northern Ireland must refuse to accept this punishment on the basis that the poppy is not, nor ever has been, a political symbol.

The various FA’s of course, have a record of ballsing things up and we are already hearing noises about fines being paid, albeit reluctantly, in an effort to avoid any potential sanctions. But in this instance, all those sitting behind their polished desks at Wembley, Hamden Park, Vanguard Way and Donegal Avenue have to understand the depth of feeling involved and accept that this is an issue which is bigger than football. Much bigger in fact.

It is about the integrity of the poppy, the memory of all those who made the ultimate sacrifice and the fact that our tradition of remembrance on the 11th hour of the 11th day of the 11th month is enshrined in the British DNA. Not because it’s political as FIFA allege, but because it is honourable and respectful.

As a consequence, those who administer our national game have to do the right thing and make a stand against this ludicrous decision. Anything else would be a dereliction of the duty they owe not just to those who follow the game, but to the history of their respective nations.