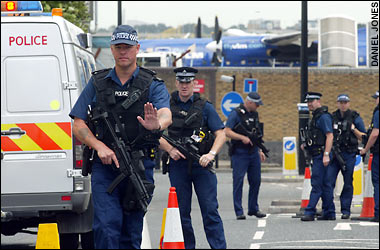 There has been a lot of talk today about the idea of a shoot to kill policy, much of which is clearly coming from people who have probably never even held a weapon let along fired one in anger.

Central to their opinion is the idea that if an armed policeman finds themselves in a situation where they have to discharge a round, they should employ a shoot to wound policy. This would allow the assailant to be questioned and/or face justice at a later date.

Now whilst I am certainly no expert, I have let off more than a few rounds in my time and so with that in mind, I can state with some degree of authority that the idea of a shoot to wound policy is bollocks.

This is real life, not a playstation game or a Hollywood movie. You don’t shoot to wound, you don’t even shoot to kill, you shoot to stop. As such, those trained to use a firearm in the execution of their duty, be they soldier or copper, are taught to aim at the central mass because if you take a round in the chest, you are almost certainly going to be in serious trouble. At best you’ll have been  stopped, at worst, you’ll be dead. And in all honesty, in either case you’ll only have yourself to blame because you’ll have been doing something you really shouldn’t have been.

Shoot to wound isn’t even practical anyway. These are marksmen, not medics. And leaving aside the difficulties of trying to hit an almost certainly moving target whilst under the intense pressure of a firearms situation, what about the implications for the officer if they fired a shot and missed? What offence would they be guilty of if the assailant went on to blow themselves up, kill a member of the public or a fellow officer? Or what if their shot hit an innocent passerby? And how about if they took the shot to wound but killed their target instead? The lawyers would have a bloody field day.

We owe the security forces in this country a huge debt and over the coming months we will need them more than ever. If the police are in a position where they are forced to take fire at a target it will be as the very last resort and at that point, we need them to be 100% focussed on what they have to do.

The idea of placing an additional pressure on them is not only ludicrous, it is downright dangerous.