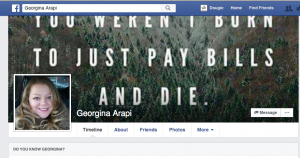 I awoke this morning to discover that I had a new troll. Her name is Georgina Arapi and she’d apparently taken exception to my recent blog, It’s time for charity to genuinely begin at home.

Now I have no problem with people holding different opinions to mine and indeed, have been called many things in my time and been accused of holding all kinds of beliefs. However, I learnt long ago that the second you start trying to defend yourself against such accusations, you’ve lost. Conversely, if you stand your ground and come from a position of confidence in your own beliefs, you usually disarm the accuser leaving them with nowhere to go except into the world of reasoned debate or onto the other side of a ‘blocked’ button. Or so I thought.

For what Georgina did was to avoid any direct contact with me and instead, began to trawl through my Facebook friends list and send people the following message: 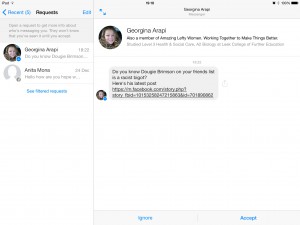 That, I do have a problem with.

Thankfully, someone did the decent thing and let me know what she was up to but given the nature of the attack, I decided that rather than deal with it privately as I would normally, I would fight fire with fire and expose Ms Arapi as the cowardly troll she obviously is. So I posted details of her activities on my Facebook page together with the screengrab you will see at the top of this page.

To say she wasn’t happy at being publicly outed is an understatement -not least because the response to her was far from complimentary and within a few hours, obviously in response to complaints from her, Facebook deleted my original post meaning that everything vanished into the ether. However, it proved two things to me.

First, my Facebook friends list is inhabited with all kinds of awesome people and secondly, I hit the nail pretty much on the head with the original post. Because if people on the left are being forced to resort to such a pathetic tactic as sweeping through Facebook in an effort to try to undermine those who don’t follow the same fanatical beliefs as they hold, it’s pretty obvious that they’re running scared. As of course, they should be.

For despite what they believe, caring for veterans and wanting our taxes spent on our elderly, our schools, our public services and especially the NHS isn’t racist, nor is it bigoted. It’s common sense, it’s fair and it’s the right thing to do.

Speaking of Facebook, as some people are well aware, I am one of a number of people involved in a legal dispute with Jonathan Sothcott, the producer of Top Dog.