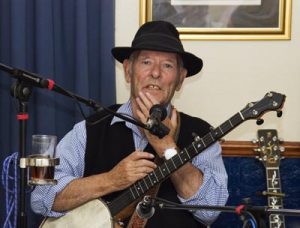 It is, somewhat unbelievably, a year to the day that my dad passed on.

I can’t speak for the rest of the Brimson clan (although I suspect I probably do), when I say that I still haven’t fully accepted that the old man has actually gone. But then again, I talk to him pretty much every day anyway so whilst he might not be ‘here’ in the physical sense,  I know he’s never far away. Besides, since I’m increasingly being told that I’m morphing into him, a brief glance in the mirror will always jog the memory.

I won’t however, go on about the old git and write about how our lives are a little less full without his input, even though they are. Instead, I thought that the best way to mark today would be to post the eulogy I gave at his funeral. Not just because it encapsulated pretty much everything I wanted to say about him, but because it provides a timely reminder of what was actually a pretty perfect send off. I certainly can’t recall ever going to a funeral which was capped off by a round of applause. A genuine masterstroke of an idea courtesy of my brother.

So here it is. If you knew him at all, I hope it brings forth a smile. If you didn’t, well you missed out but I hope this gives you some insight into the type of man he was and how much he meant to us all.

There’s an irony about today which I don’t think is lost on anyone in the family and it’s that dad would have loved it. He was after all, at his best in front of an audience and his happiest when he was the centre of attention. Indeed, I’ve often considered the possibility that one of the reasons he had six kids was so that there would always be someone around for him to talk to, about himself.

That’s not a criticism of him, far from it. Wanting everything to revolve around the world of Del was just a part of what made him both the great entertainer we all know he was and a pretty awesome dad.   And he was an awesome dad. Not in the traditional sense as the graft of actually bringing us up was mostly left to our fabulous mum, or even in the sense that he was always great fun to be around, which he was. But in the sense that whatever he did, be it music, golf, photography or even astronomy, he was passionate about to the point of obsession. And he was the same with his kids. For whatever any of us decided to do, he was always incredibly supportive and backed us to the hilt.

I don’t think I ever fully appreciated that until I sat down to write about him. Nor did I realise quite how much he had influenced my own working life.   You see unlike my brothers, who all followed in his musical and comedic footsteps, I have zero musical ability and I can’t tell a joke to save my life so having trod a different path to the others I’d always thought that his impact on my various occupations was negligible. But since his death I have come to realise that the only reason I’ve been able to forge a career as a writer is because his storytelling DNA runs through every single sentence I have ever written, and it always will.

I wish I had acknowledged how grateful I am for that when he was alive but I think he knew it anyway, I certainly hope he did. I do know how proud he was of all of his kids because he never tired to telling anyone who would listen about us and what we were up to. Not that he was adverse to taking a chunk of the credit for it. Indeed one of dads greatest gifts was his incredible ability to turn any and every conversation around so that it ended up being about him.

That was never more evident than in recent years when his deteriorating health gave him a lot to talk about. Not that he ever complained, he just liked everyone to know he was ill but that like the old trouper he was, he was struggling on regardless.

I mention this now, of all times, because in recent months, his various ailments meant that whenever he left the house, he would require the use of a wheelchair. But for my old man, far from being a pain it was actually a win-win situation. For not only was he being handed a legitimate excuse to play the poorly card, he was also gifted a captive audience in the shape of the poor bugger who had to push him around.

This task fell to me on numerous occasions however far from being a chore, it quickly became a source of hilarity for the two of us. For whenever I’d take him anywhere we’d spend an hour or so entertaining each other purely by seeing who could embarrass the other the most. And I’m not talking about stuff like introducing me to the checkout lady in Tesco as his slave, or telling her that he might not have enough money in his bank account because he thought I’d been stealing from him, both of which he actually did, I’m talking proper embarrassment.

One of my favourite examples of this took place during what turned out to be our last shopping trip together when he told me that he wanted to go to Primark as he needed some new socks. As I was wheeling him between the racks of clothes, he suddenly announced that he also wanted a new belt.

Normally, something like this would be a routine purchase however, nothing was routine with my old man. For not only did he insist on finding one that looked good, he insisted on trying it on. Or rather, since he was unsteady on his feet, he wanted me to help him try it on.

Despite my protests at the fact that actually having to touch him filled me with horror, I soon found myself kneeling in front of him with my face far too close to his groin for comfort and my hands around his waist threading a belt through his trousers as he held up his coat with one hand and rested the other on my shoulder.

He of course, found both my discomfort and my embarrassment hilarious but bad though things already were for me, they were made even worse when I suddenly realised that we were being stared at by a middle aged woman who having put two and two together and come up with a solid five, wore a facial expression which was a perfect mixture of horror and disgust.   To dad of course, this was like an open goal and even as I turned beetroot, he flashed his immortal grin at her and said ‘It’s alright love, he’s almost finished’.

Sadly, as I said, that turned out to be our last trip out together and so I was never able to extract revenge. But whilst I will have to concede defeat in that particular battle, I can take a little comfort in the fact that I did manage to get the last word in.

On the night he fell ill and was taken to hospital, I sat alone with him in A&E and as there was no indication of how the night would unfold, we ended up in a cubicle talking about anything and everything to pass the time and inevitably, talk soon turned to the politics of the day. In fact his very last coherent sentence was ‘I really like that Theresa May’ which kind of summed him up. A Tory to the end.

And it was the end. For shortly after that, he began to slip quietly and peacefully away as I held his hand.

But whenever dad and I parted, our closing words to each other were always ‘be lucky’ and I will be forever grateful that those were the last words he heard during his life. Because they were.

So wherever you are now old man, be lucky. We certainly were. 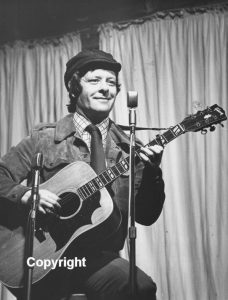