Thus far, despite numerous requests (44 at the last count), I have refused to make much comment on the trouble at EURO 2016. The main reason being that I’ve become as tired of saying ‘I told you so’ as I’m sure people have of hearing me say it.

But equally, it wasn’t exactly difficult to see how it would pan out as it was fairly obvious that as soon as the English came under attack and fought back to defend themselves, the general public, fuelled by the British media, would brand them all as scum until the reality hit at which point they would change their generally ill-informed tune. We would then see the usual drivel being spouted by the press (‘did it ever go away?’ ‘why always us?’ ‘they’re all Brexiters’ etc) and blame apportioned to everyone except those who are actually guilty. Including me. Oh yes, amongst others, The Mail claimed that Russian hooligans have been inspired by my books and of course, Green Street.

Finally, we would start to see some sensible reporting of the problem including some serious investigation which is of course, exactly what has happened and where we are now. It’s a well worn path and one which someone like me, who has walked it many times, is bored of treading. Hence, it’s better to avoid it and wallow in the knowledge that pretty much everything we wrote in Everywhere We Go back in 1996, was bang on the money and continues to be relevant some 20 years later. A sad indictment of the game.

However, there is one element of the violence in France which has intrigued me enough to want to speak out and it’s one which not many people have picked up on.

I talk about the differences between the two elements in great depth in my book Eurotrashed. The Rise and Rise of Europe’s Football Hooligans but in simple terms, those English/Brits who are not averse to the odd confrontation at games tend to keep confined to match days whilst for the average Ultra, it’s more of a 24/7 thing. As a result, it’s much more organised and much more violent.

That said, Ultra, like hooliganism, is a catch-all term. The groups we

are seeing from Russia are very different from the Ultra who infest Italian football who are in turn, different from the Barras Brava who follow football in Latin America. Indeed, we also have a fledgling Ultra culture emerging in the US although there is little to suggest that violence will ever become ingrained in MLS.

The one constant however, is that these groups look to English football as the home of hooliganism and so when the opportunity comes to confront the historical ‘top boys’ in battle, it will usually be grasped with both hands. What we are seeing with the Russians at EURO 2016 is the most brazen and public example of this although ironically , it may well backfire with many English groups already dismissing the attacks on innocent fans as being little more than cowardly and certainly against the spirit of the culture.

Quite what the next few days has in store is anyones guess although as I type this, Lille is on high alert with Russia due to play there tomorrow and the city full of fans from many nations including England and Wales who play in Lens on Thursday. There is also the small matter of the Poles, the Germans and the Turks (all of whom have already been involved in trouble which has gone largely unreported) not to mention Ukraine, Slovakia, Sweden, Croatia and of course, the locals who, as we saw in Marseille, are not averse to picking off the odd Englishman.

But whatever unfolds, given the response from UEFA today, the consequences for those nations whose fans get involved in any further trouble are going to be significant.

Let’s just hope that sanctions are all we have to talk about once the dust has settled.

I wrote the following blog a year ago but in light of events in France and the growing clamour to strip Russia of 2018, I thought it worth posting again. Because in my opinion, nothing

Not surprisingly, in the wake of the furore surrounding FIFA, calls have been made to strip both Russia and Qatar of their respective world cups.

Whilst I totally agree with the logic in respect of Qatar, the idea of relocating 2018 even to England, fills me with horror. Yes, Blatter may be as bent as a nine bob note and yes, allegations that the bid was corrupt may well have a basis in fact, but to me the decision to stage the tournament in the motherland was always absolutely the correct one for one very simple reason.

One of the great strengths of the global game has always been the fight against discrimination in all its forms and by taking the World Cup to Russia, it underlines that message by providing an opportunity to not only bring about, but actually witness real change. That’s why we have to continue along that path because to do otherwise would be a massive mistake.

Now I know that will cause some angst in certain circles however, unlike the majority who will pontificate about this, I have actually been to Russia. Three times in fact.

Just as importantly, I’ve spent considerable amounts of time in the company of Russian football fans including those who are, shall we say, questionable. As a consequence, I have more than a passing knowledge of what makes these guys tick and that knowledge is based not on the ill-informed drivel that the British tabloids are prone to pumping out, but on actual experience. And one of the things I learned quite quickly is that Russian football culture is very different from what we are used to here.

That’s not to excuse the problems which infect the game there, many of which can legitimately be described as both racism and homophobia. But it is fair to say that racism in Russia is a very different animal from the beast we have here in the west and to treat the two in the same manner is a grave error.

More importantly, if the game in the motherland is ever to see an end to discrimination, the very last method of bringing it about would be via the use of any kind of blanket punishment because in my experience, nothing will cement public attitude faster than the western nations adopting a ‘holier-than-thou’ stance. Russia is many things, but fiercely patriotic stands head and shoulders above everything else.

Therefore, it is imperative that the tournament go ahead as planned because it provides the perfect platform for organisations such as FARE and Kick Racism to work with the Russian authorities and start actively promoting an anti-racism and anti-homophobia agenda.

Just as importantly, it will provide scope for that agenda to be taken to those who stand firmly at the very heart of the problem because the support of Russian footballs extremist support will be absolutely vital. That might sound like wishful thinking but in my experience, it is perfectly achievable as long as it is done in the correct manner. However, if that is to happen, work must begin sooner rather than later because it’s going to take time to build both mutual respect and trust.

Thankfully, we currently have the opportunity to do all of this which is why to give it up would be a tragedy. Not just for Russian football or for the entire Russian nation, but for everyone else. Lest we forget, football drove the anti-racism message into English society from the dark days of the 1970’s and there is nothing to suggest that exactly the same thing won’t happen in Russia on the back of 2018.

Is it really worth the risk of losing that chance?

I’m delighted to tell you that my non-fiction book Rebellion is finally available as an ebook. 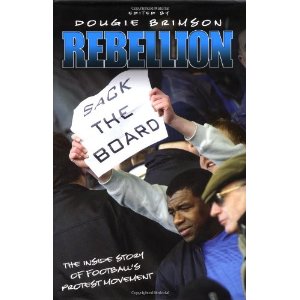 First published in 2006, it explores the background to some of the more infamous fan protests told by those who were right at the heart of things.

Amongst the clubs featured are Charlton, Wimbledon, Manchester United, Manchester City, Norwich and Bournemouth amongst many others.

I can also announce that my last novel, Wings of a Sparrow, may well be heading for TV as a four part comedy drama. Watch this space!

All of my books and DVD’s are available from both Amazon and iTunes.