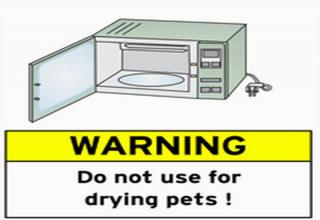 As anyone who knows me or reads my blogs on a regular basis will know, I am a huge advocate of something that has seemingly become old-fashioned in this modern age. It’s called common sense. And it’s demise has not simply weakened this country, it’s made it a laughing-stock.

I know, for example, that coffee is hot and that heat burns therefore I don’t need to have a label on my cup reminding me of that fact (although if you think I look so dense that I do, maybe you shouldn’t be selling it to me in the first place). Similarly, I can work out for myself that peanut butter contains nuts, fish fingers contain fish and that vegetables are suitable for vegetarians.

Common sense is, of course, most notably lacking in those who we have charged to run our country and this week that has been brought home in the most brutal way possible by news that the aircraft brought to replace the Harrier, in my humble opinion the greatest fighter aircraft of modern times, is not fit for purpose. A simple fact almost everyone with links to the Royal Air Force could have told them years ago saving billions of pounds. OUR pounds.

So, with this madness in mind, in the extremely unlikely of my assuming power over my country of birth, I thought it time to compile a list of 50 things that would sit high up on my ‘to do’ list. All of them seem to be perfectly reasonable to me yet for whatever reason, none seem to feature in the minds of the current government. In some cases, quite the opposite. Which kind of proves my point.

They are listed in no particular order and I’ll publish half now and the rest tomorrow but if you think I’ve missed anything off, please feel free to suggest it and if it’s sensible, I’ll add it to my manifesto. Come the revolution, I may even offer you a job.

Similarly, if anything here offends you, then maybe you should consider why and how your feelings are being hurt because as far as I’m concerned, you’re part of the problem. Remember, you can’t be offended, you can only take offence. A simple truth that political correctness seems to have eradicated from this once great land.

The other day, as the hacking scandal was still in the early stages of unfolding, I became embroiled in one of those ‘what’s wrong with the country’ type debates. Now usually I relish discussions like these because given that I am always right, it’s inevitable that sooner or later people will come round to my way of thinking and so the entertainment value comes in the journey they take to get there. However, in this instance time was pressing and so I let loose my killer point. The one I tend to save until close to the end. Because the simple truth is that the main thing wrong with this country is that the concept of shame has been lost.

Usually when I make this statement, it results in a silence. After all, it’s a fairly simplistic way of looking at things but it’s very rare that anyone can ever provide any kind of argument against it.

How else can you explain politicians refusing to take any blame for the damage they inflict on the population whilst at the same time bleeding us dry by fiddling their expenses blind? Or footballing greats trying desperately to line their own pockets by selling clubs to far-eastern ‘businessmen’? The answer of course is that they have no shame and if caught out, merely fight tooth and nail to escape any kind of justice be it legal or moral. Justice which would almost certainly never come anyway because as a people, we are ruled by apathy.

The irony is of course is that in the past we have relied on the press to fight our battles for us but in light of recent events, can we rely on that any more? I hope so. Jaundiced as I am against certain sections of the media as a result of my own experiences, I know that there are far more honest and decent journo’s than dodgy ones.

But for me, bent politicians, sportsmen, journalists or even coppers isn’t even the worst of it. Because for me the real rot happens nearer home. When I was younger claiming the dole was unthinkable because of the shame it would have heaped on you but more importantly, your parents.

However, that was nothing compared to the idea of falling pregnant outside of marriage…. Christ almighty, that was the stuff of nightmares for entire families who not so long ago would have farmed daughters out to aunties in the middle of nowhere rather than endure the humiliation of having a knocked up (and unmarried) daughter at home.

Yet these days, continuing to pop out kids whilst living off the state or claiming jobseekers or DLA whilst working on the sly are both seemingly acceptable career paths. How the fuck did that happen? How did it become OK to sponge or steal off of everyone else because make no mistake, that’s what we’re talking about here.

I seem to recall once reading that it took 16 taxpayers on an average wage to fund just one single parent who wasn’t working. Now I don’t know how accurate that is but it has to be pretty close and even if you halved that number, it is little more than a national disgrace. Think about that for a minute…. 8 people (at a generous best). That’s you and 7 of your mates. Working your tits off simply to fund one person. Nothing else…. just that one person.

It beggars belief doesn’t it. So why do we allow it to happen? The answer is simple really, because no one understands the concept of shame any more.

Don’t get me wrong, I know enough single mums (and dads) as well as lads out of work to know that we’re talking the exception rather than the rule and I also know enough people with disabilities to understand that they need all the help that we as a society can provide. But the reality is that there are far too many exceptions. I don’t know about you, but I’m sick and tired of hearing ‘I’d be £10 a week worse off if I went out to work’ because to me as a taxpayer, what that translates to is ‘if you went out to work you bastard, this country would be X amount BETTER off’. So fuck off out to work!

The government of course, would argue that they are doing what they can to get people back into work and to be fair, they are making the best of what is a shite situation left behind by a shite Labour government.

But until the people of this country decide that they are sick and tired of being taken for mugs by the idle and the feckless and actually start to help the authorities do something about it, nothing is going to change. We cannot afford for that to happen, not just financially but morally.

And maybe that’s where the real shame lies. With us.