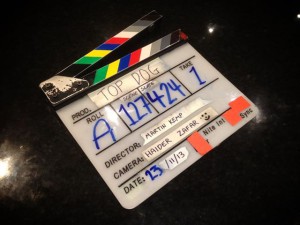 Hollywood has come calling, or maybe Pinewood but who cares? Your novel, your baby, is heading for the screen.

What happens next is entirely down to one single thing; budget. The best case scenario will involve huge option payments, a steady stream of expensive lunches in exclusive Soho clubs and for the lucky few, business class flights to Hollywood. The more likely scenario will involve coffee’s in dingy Starbucks, lots of phone calls and a significantly smaller option fee. In some cases, there may well be no option fee at all. At least not one worth of the name.

I’ve had both those experiences, many times in fact. But whilst the latter may not be the experience of choice, it never detracts from the excitement and nor should it. This is the dream.

It is worth noting however, that it can all end in a heartbeat and  there will be nothing you can do about it. Honestly, if you think getting a book published is hard work, try making a movie. It’s like juggling fish in the dark.

However, assuming that things unfold as you hope they will, one of the first issues you’ll encounter is the adaption process and I thought it might be worth looking at this particular aspect. For as someone who’s trod that particular path, it’s one that not many authors tend to consider.

In many, if not most cases, the decision of who will adapt your novel will be taken out of your hands anyway. The producers will have a list of screenwriters in mind and whilst they may well ask you to meet with them, it will be as much out of courtesy as anything else.

In this case you only have one choice which is the infinitely more sensible one of taking the money (as much as you or your agent can get upfront) and settling back to enjoy the ride.

There will however, be times when the opportunity to write the adaptation will be handed to the author themselves. Tempting though it is to bite their hands off, I would urge anyone considering accepting such an offer to think very carefully before agreeing to take it on.

It should be fairly obvious that screenwriting is a very different discipline from writing for publication and it brings with it very different challenges. Many of these centre on the fact that film making is a collaborative rather than a solitary process and that ultimately what ends up on screen won’t be your vision for your story, it will be the directors.

What that means in real terms is that whilst the director will work with you to get the best from you that they possibly can, the harsh reality is that if you can’t deliver what they want they will replace you. In fact that will be written into your contract. Whilst it’s not happened to me -yet- I know others it has happened to and in every case it had a huge impact on both their pride and their confidence.

Even if you do deliver, it’s important to understand that as the first link in the creative chain, your role, whilst vital initially, will rapidly reach a point where it is all but dispensed with.

This can be tough to handle, very tough. Not least because if you’re not careful, watching others make changes to your work without any input from you can very quickly start to feel personal. When it’s your own adaptation of your own novel, those feelings can be magnified ten fold.

And those changes will come thick and fast. If you think that your first efforts will be anywhere near close to a shooting script, think again. The screenplay I adapted from my novel Top Dog, which we filmed in 2014, went through something like 11 rewrites. Each one the result of input from various involved parties with far more power than I. I even had to change the ending and if you know anything about me, you will know how important those are to me!

Indeed, the list of factors that might have an impact on your script would fill a lengthy volume. One of the strangest I encountered with Top Dog was the casting. For with the original book being a sequel, my central character was like an old mate. Yet when the actor Leo Gregory was cast in the role, as good as he is he could not have been more different from the image I’d had in my head for over 15 years. That was a huge and quite difficult mental adjustment to make. One made all the more difficult because the pressure to get into pre-production was already growing.

Eventually of course, you will deliver a script that everyone is happy with but then will come possibly the most difficult part for you as a writer. The part where you have to relinquish even the last shred of what little control you actually had.

From that point on, you will have no input whatsoever save for the occasional short rewrite to suit a demand from the director or producer. You will certainly have no right to make any changes yourself or discuss anything relating to the script with the actors even if they ask you. In fact interfering with anything on a set can have huge and usually unpleasant consequences. A lesson I learned on my first feature, Green Street, which resulted in me being banned from the set altogether.

As a consequence, you’ll have to sit back and watch actors perform scenes and deliver lines in ways that are nothing like how you imagined them when you committed them to paper. For many writers, that can be toughest and most frustrating time of all. Indeed there are plenty of screenwriters, even well established ones, who will never venture anywhere near a film set for that very reason.

So is it worth adapting your own novel for the screen? Of course it is. As soul destroying as the film business can be it can also provide amazing and unique experiences. From playing football with Elijah Wood to watching highly choreographed fight scenes unfold before your very eyes, film sets can be glorious places. There will also be occasions where the actors will replicate your version of your script down to the very last vocal inflection. Trust me, those albeit rare moments will make any amount of pain and anguish worthwhile.

It can also do wonders for your ego, your status, your future and your bank balance and if you think seeing your book on the shelves in Waterstones is a thrill, wait until you see you name on a film poster on the underground.

Just make sure that if you do venture into the world of film, whatever path you take, make sure you take every step with your eyes propped wide open. 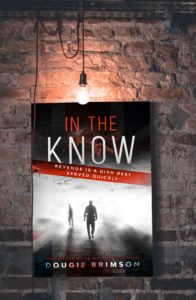 Dougie Brimson has written three award-winning feature films (Green Street, Top Dog and We Still Kill The Old Way) and is the author of 16 books including the best-selling Billy Evans gangland trilogy. His latest thriller, In The Know, was published by Caffeine Knights in May 2020.

His next novel will be his first military thriller and will be published in Spring 2021.

All his previous books and DVD’s are available from both Amazon and iTunes.

*A version of this article was first published in the Crime Writers Association magazine, Red Herrings.*