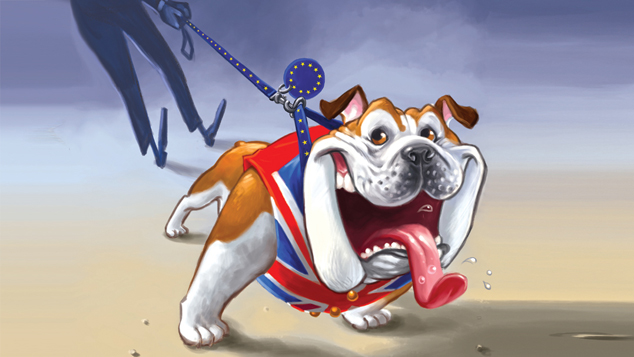 The other day, I employed the power of Facebook to ask for a single sensible reason why we should remain as members of the EU.

Well with the utmost respect to those at the coal face of the industry, in terms of eliciting sympathy, bankers rate fairly highly on the ‘fuck off’ scale and indeed, the majority of people who responded to me would seemingly be delighted to see them getting a taste of the medicine they’ve spent years creating. (Go and see The Big Short. Honestly… go see it!)

This reaction didn’t exactly come as a surprise. I’ve never made any secret of the fact that I’m English first, British second and European never and for decades I’ve watched helplessly as my country slipped ever deeper into the cesspool that is the EU. As a consequence, the opportunity to leave genuinely excites me, and for two particular reasons.

Firstly, I think it’s fairly obvious to anyone who lives in the real world, as opposed to an ivory tower or the wilds of Cumbria, that our housing and public services are at breaking point. And despite the liberal-left screaming that this is all due to a lack of investment by the Tory government (whilst conveniently forgetting the 15 years we endured under Blair and Co) the stark reality is that we are in this situation because our population has risen by around 10% since 2000. We might not be full, but it certainly feels and looks that way in parts of the country. It is therefore imperative that we gain proper control of our borders which is something we simply do not have at the moment and nor will we have whilst a member of this mess.

Inevitably, having finally woken up to the fact that the majority of the population want out, the ‘stay’ campaign have begun a policy of scaremongering (‘jungles’ in Kent’… seriously?) whilst even that well known lover of all things British, the joyous Ms Merkel, has begun pleading with us to remain. Of course she has, she’s suddenly realised that fairly soon she’s going to be looking into a daily black hole where our £33,000,000 should have been as well as having to deal with a refugee crisis which could not have been handled any more appallingly if she’d tried.

Well those are her problems, not ours. And whilst I’m not daft enough to accept that it won’t be a bed of roses from day one, I fail to see how in the long term, the UK can fail to prosper away from an organisation which is absolutely nothing like the one we originally signed up for back in 1973. We might even start putting the Great back into Great Britain.

It’s a no brainer for me, Brexit all the way. The sooner the bloody better.

PS: I must reluctantly make reference to this, if only because it’s one of the sticks being used to beat the ‘Leave’ lobby. If you’re reason for voting to remain in the EU has anything to do with UKIP, I would urge you to think again. Don’t vote to stay because you don’t like Nigel Farage, vote to leave because it’s the right thing for the country, and ultimately, for you.

Speaking of Facebook, and apologies for repeating myself, but as some people are aware, I am one of a number of people involved in a legal dispute with Jonathan Sothcott, the producer of Top Dog.