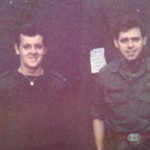 On Dec 31st 1975, a week short of my 17th birthday, I left the confines of my happy, if chaotic, family home and headed off for an adventure. Or to put it another way, I headed off to begin my basic training in the Royal Air Force.

I have written about my time in the military many times and no doubt, will do so again as I become more and more involved in all things veteran. However, the more I think back to those days, the more I have one very specific regret; I never kept a diary. As a consequence, I’ve forgotten far more than I can remember.

Take the photo at the top of this blog. Yes, that fresh faced lad on the left is me, standing alongside a gentleman (and I use that term loosely) named Pete Cutler. It was taken in approximately 1980/81 and the fact that we were on deployment with the Harrier Force and flying out of a forest somewhere in Germany are about the only details I can remember with any degree of accuracy.

On the face of it, that would be enough. It is after all, a relatively simple picture. However, that single photograph serves as a portal into a unique world that very few people ever got to experience. I’m not talking about being at the sharp end of the West’s response to the threat posed by the Soviet Union or the fact that we were working with what was possibly the greatest military aircraft of all time. I’m taking about what went on when the flying stopped and we were free to relax. And when I say relax, I mean get up to mischief.

Indeed, it’s safe to say that were I ever to write my autobiography, life out in the field with 4 Squadron RAF (and Mister Cutler for that matter) provided that young fresh faced lad on the left with enough anecdotes to fill more than a chapter or two.

Blagging a flight in the rear seat of a T2 Harrier, living in an abandoned Nazi Hospital, swearing at Fergie (the Princess, not the manager), waking up in a lake (literally), encounters with the SAS, getting shot at and even late night visits to live sex shows are amongst numerous tales I have rattling around my head from those days but sadly, thanks to the obligatory intake of vast amounts of duty-free alcohol coupled with the passing of far too many years, the details of most are at best sketchy and at worst, vague. Yet had I kept even a simple diary, all of this history and more would be at my fingertips ready to be transcribed.

The fact that I didn’t is one of my greatest regrets and not just as a writer or even as a veteran, but as someone who has lived and enjoyed their life. Then again, if I were able to put it all on paper, it’s fairly safe to say that it would be quite a read!

So please, whoever you are and whatever you do, keep a diary, even a basic one. And urge your kids to do the same. You never know when it might come in handy.