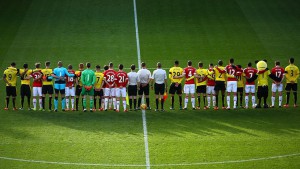 2 thoughts on “Harry the Hornet: football’s perfect response to Paris.”