A photograph appeared this week which shamed this nation.

No, it’s not the one you are thinking about, horrific though that was, it’s another one. 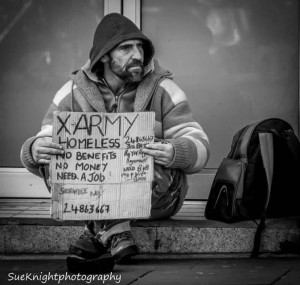 I know something of the background to this and I’m glad to say that thanks largely to the veteran community on social media but primarily to some of the excellent charities who support homeless veterans,  the guy and his family are now receiving the help he needed. But that’s not the point, the point is that he ended up in this desperate situation in the first place.

That he did so is a source of shame to us all.

A nation is defined in many ways but to me, a key reflection of a country is the way it looks after those who have served to defend and protect it. One only has to look toward the US to see the reverence with which it treats its military veterans to see that and the same can be said of many countries across the world. So why is it not the same here?

For sure, things are much better than they were 20 years ago when telling someone you were an ex-serviceman was akin to an admission of leprosy, but even now, veterans are frequently regarded as second class citizens. That’s especially true when it comes to the issue of social housing which goes some to explaining why there are in the region of 4500 veterans currently living on the streets of Britain.

That isn’t right, it isn’t fair and it’s actually contrary to the Armed Forces Covenant which states that local authorities in England give additional priority to members of the armed forces community with urgent housing needs. Well if being homeless isn’t urgent, I don’t know what is yet all too often, and for all kinds of reasons, elected officials are allowed to duck their duty of care and instead, abdicate their responsibility toward veterans to charity.

But at a time when this country is once again on the verge of asking our men and women in uniform to place their lives in danger to protect our way of life, should we, and especially our elected officials, not be doing better for their comrades? Of course we should. Not just for their sakes, but for the sake of all those who made the ultimate sacrifice. Be it on The Somme, Normandy, Burma, Korea, Northern Ireland, The Falklands, Kuwait, Kosovo, Iraq, Afghanistan or any one of a thousand conflicts in which the British military have been involved.

One homeless veteran is one too many. It always will be.

If you would like to know more, please visit Homes4HomelessVeterans or Soldiers Off The Streets.