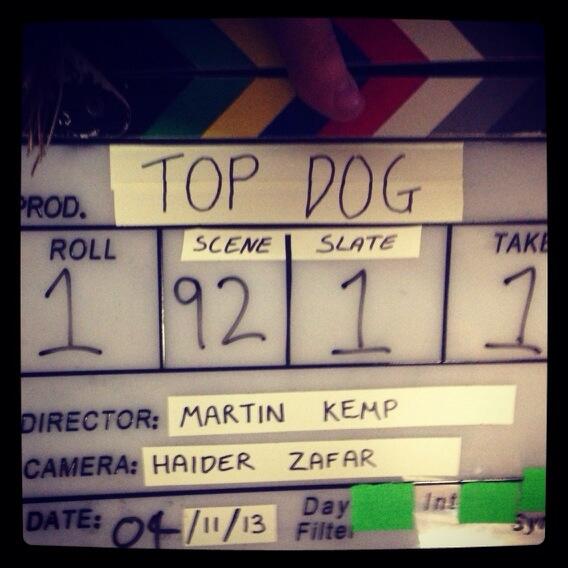 So that’s that. Whilst there are still a couple of days filming to go, to all intents and purposes my role as the writer of the movie adaptation of Top Dog finished when I drove out of 3 Mills Studio’s in East London last night. To say it has been quite a few weeks would be an understatement.

It’s no secret that my previous experience as a full-on feature film screenwriter wasn’t exactly great but it’s fair to say that as polar opposites go, Top Dog sits firmly in the epic category. Indeed, in all my time on set (and I was on set almost every day) I only had one gripe and that was yesterday evening after what had been a very long, cold and tough day. And no, I’m not going to tell you what it was or who it was with.

Credit for that must go to the amazing production team put together by producer Jonathan Sothcott who not only worked miracles at times but put up with me wandering around asking questions and poking my nose in.

Ironically, as a former military sort where every single thing is religiously and meticulously planned, organised and structured, film sets are actually something of a nightmare as they are, to say the least, chaotic places. Yet to a man (and woman!) the crew on Top Dog were truly brilliant and I doff my cap to them all for what they’ve done these last few weeks.

Much the same can be said of the entire cast who, from the simply awesome Leo Gregory through to the numerous supporting artists (or ‘lads’ as I prefer to call them) who came along simply for the experience of being in a movie, breathed life into my humble script. But I’m not going to talk about them purely because I don’t need to. You’ll soon see for yourselves how good they all were. Believe me, you will.

However the real star of the Top Dog shoot has for me been the director, Martin Kemp. As genuinely nice as you imagine him to be and frighteningly talented, he led from the front every single day and was an absolute pleasure to be around. Just as importantly, as I have previously blogged, he’s taught me so much about the process of developing a script and has even got me to the point where I’ve started to think that I might actually be half-decent at it! Who would have thought?

And so now it’s done, and now I wait. Don’t ask me what comes next because I have no idea. People talk about seeing rough cuts and afternoons in screening rooms but this isn’t my world and so I simply nod my head as if I know what they’re talking about.

What I do know is that when Top Dog is finally put together, it’s going to look fucking amazing. Because I watched it being made, and it was the absolute bollocks.

I cannot wait to do it all again.

Top Dog will be released next spring/summer but in the meantime, if you’d like to read the book that started it all, you can download it from Amazon by clicking on here

And don’t forget, Top Dog is actually the sequel to #1 best-seller The Crew which is not only available to download as an ebook, but has just been re-issued in paperback. Again, you can purchase that simply by clicking this link.

One thought on “Top Dog – done and almost dusted.”