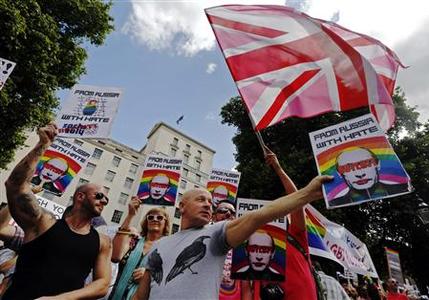 I am off to Russia next month. This is a statement of fact.

I’ve been invited by the organising committee of the St. Petersburg International Film Festival to talk at the inaugural programme of football films and will at the same time be doing some PR for the launch of the Russian language edition of Wings of a Sparrow. If you didn’t know, I sell more books in that great nation than I do in any other country bar the UK.

This will actually be my third visit and as someone who spent many of their formative years serving in a military which was totally focussed on the threat posed by the former Soviet Union, as a country it has a special and obvious significance. But it is I have to say, an amazing place primarily because of the wonderful Russian people.

However, back in my home country news of my impending visit has attracted some flak. Now the receipt of grief is not an unusual occurrence for me and usually, as someone who sits firmly in the ‘if they’re slagging you, at least they’re aware of you’ camp, negative comments are generally warmly welcomed but this time it’s different. This time it’s irritated me.

The reason for this most recent bout is because, according to some, I should have refused my invitation as a protest against the recently introduced laws banning the promotion of homosexuality in Russia. The fact that I didn’t apparently makes me a traitor to the industry I have somehow found myself working in and has even attracted inferences that I am homophobic.

I have no intention of defending myself against that accusation because I don’t have to. But what really grips me is the hypocrisy of some of those people throwing this bullshit in my direction. The bulk of whom are only throwing it because they know they’d never receive such an invitation in the first place and if they did, no doubt they’d bite off the hand which offered it and wouldn’t hesitate to do so.

And let’s take that a bit further. For if these people are so anti-Russia, can we expect them to protest outside the Bolshoi Ballet when it visits London or the Moscow State Circus when it next tours the UK? Similarly, will any of those struggling to make a living in the acting profession turn down a role in a movie which would involve filming in Russia or for that matter, a part in a movie written by the traitor Brimson? Would they bollocks.

And since they are so apparently keen on homosexual rights, why are they not encamped outside the Saudi embassy? Or for that matter, any of the many which represent nations which all but encourage the very worst kind of homophobia?

The fact they’re not kind of proves my point. If you want to talk the talk, walk the fucking walk.

I certainly have my opinions about what the Russian government have done and if I’m asked during my stay there, I will respond accordingly. But the bottom line for me is that it’s their country, not mine just as it is someone else’s fight, not mine.

And I’m certainly not going to miss out on a trip to a country I have come to love simply to appease people who in some cases have simply jumped on the back of Stephen Fry’s latest trendy cause.

A couple of snippets to pass on: Aside from the aforementioned publication of Wings of a Sparrow in Russia, I’m thrilled to tell you that thanks to publishers Caffeine Nights, October will also see it published in print here in the UK. They will also be re-releasing The Crew and early next year, a very special movie-tie in edition of Top Dog.

I will release more details on that closer the time but you can pre-order Wings of a Sparrow here.

I’m also quite excited to let you know that within the next couple of weeks, details should be released regarding a new movie project I’ve been working on. This one is literally going to be old school and is going to take things in an entirely different direction. Filming is scheduled for Feb 2014 and if we can secure anywhere near our proposed cast, it’s going to be a genuine British epic!

As Top Dog rolls ever closer toward filming, could I please remind everyone that details regarding casting will be announced on both Facebook and Twitter when the time is right so please don’t mail me or anyone else involved with the project as we simply have nothing to tell you at the moment.

In addition, and without wishing to cause offence, with so many things on the go that my meagre brain is struggling to cope, I for one have no time to record details of anyone wanting to be considered and I’m certainly not going to remember you. Please… just keep your eye out!