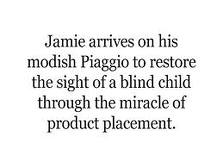 For some time now, I have watched bemused as the cult of the celebrity cook has taken an increasingly tight grasp hold on the consciousness of this country.

Almost every evening these days our television channels are swamped with programmes made by smug twats showing us how to cook pretentious food which no one other a wannabe smug twat would ever even attempt to try and cook. As if that isn’t bad enough, a visit to any bookstore or supermarket (sic) will see shelves positively sagging under legions of weighty tomes written by the same smug twats for the delectation of the same wannabe smug twats.

Quite how this cult ever came to pass escapes me and normally I would say a hearty fair play to all of those currently making fortunes off the back of the great British public. After all, I’ve done much the same thing albeit on a (much) smaller scale.

However, the fact that both television and publishing have become obsessed with celebrity chefs is becoming an increasing irritation to me. Not least because some of those at the ‘sharp’ end are seemingly so far up themselves that I’m amazed they can actually see daylight. Saint Jamie Oliver clearly believes that he alone (well, with a bit of help from Sainsbury’s obviously) can save the nation whilst Hugh Fearnley-Whittingstall definitely lives in a different world from me. River Cottage my arse.

Antony Worrall Thompson has a face you would never tire of hitting, Gordon Ramsey, clever though he obviously is, brings new meaning to the word annoying (really Gordon, saying ‘fuck’ over and over again might have worked once, now it’s just tedious. Ask Roger Melly) and as for Heston Blumenthal (a man so ‘talented’ he doesn’t have a kitchen on his show, has a lab!) he’s quite possibly the most annoying git on TV.

Aside from being irritating, the one thing all the above have in common is that they are male and hereby lies my biggest problem. It’s not that these ‘cooking’ shows are inevitably slanted toward women (which if nothing else, reinforces the idea that the average bloke can’t or won’t cook) nor is it the fact that by virtue of the fact that these blokes can cook, they are elevated to god-like status in the eyes of the female population. It’s the fact that when you add together the amount of time cooking shows consume on our airwaves and then combine that with the hours of soap’s and home decorating shows which increasingly dominate our evenings viewing, it is clear that the nations broadcasters have forgotten that 50% of the population are actually male! And aside from Top Gear (and even that’s arguable these days) there are next to no programmes on terrestrial TV which are actually directed solely at men! Daytime TV is even worse! Some of the shite on there is bordering on anti-male! Loose Women… please, do me a favour and piss off!

to go to satellite TV and channels such as Discovery, Dave and the History Channel. That’s just not right.

So the next time some woman moans about the amount of sport on TV, feel free to show her the TV schedules and give her a bit of a reality check. Better still, inform her that having wasted countless hours listening and watching as some smug twat instructs her in the art of stuffing a hedgehog with stewed venison tongue coated in elderberry jelly or some other such bollocks, she might actually put some of her new found knowledge to good use by heading for the kitchen and rustling you up a meal.

After all, you might as well get something out of it. Even if it is inedible.