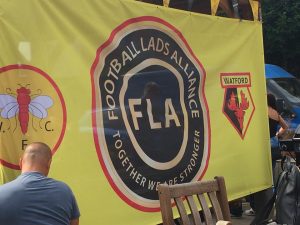 If you’ve ever read any of my books, you’ll know that one thing I’ve written about many times is the issue of fan power. Not just within the game itself, but as a potential political force.

The problem of course, has always been how one would harness that power but it seems that finally, that problem has been overcome by the formation of the Football Lads Alliance. A group which might have it’s origins within the great game, but which has seemingly struck a chord with a wider section of society. One which up until recently had felt largely ignored; Middle England.

I won’t go into what the FLA is all about (you can read more here) but the last march in London drew well in excess of 50,000 supporters (some estimated it to be closer to 60,000) from all over the UK and as we prepare to march again in Birmingham this Saturday (Gathering from 12.00 in Curzon Street and 12.30 in Victoria Square if you fancy coming along) I thought it might be worth sharing this extract from my book Barmy Army.

First published in 2000, it discusses an idea which caused quite a stir when it was first mooted and that is the formation of a single issue political party. The Football Party.

Times have obviously changed since I first wrote this and the concerns of the FLA certainly extend way beyond the confines of football but the general principle remains the same and it remains sound.

The problem however, was always where to start but given what has been achieved by the FLA in such a short time in terms of generating both momentum and interest, that problem has already been circumnavigated. So the key question is what to do next.

The answer is obvious. For if it is to make a genuine statement of intent, the clear target has to be the next round of mayoral elections which are due to take place in 2020. That might seem pie in the sky but before you dismiss the idea, consider these  two simple facts.

1. Most of our major cities have more than one professional club within their boundaries with each generating sizeable and passionate support of a kind every political party would kill for. London alone, has 14 professional clubs within the M25.

2. Only 42.6% of the population of our capital voted at the last Mayoral election. In Manchester, the turnout in 2017 was just 28.9% of the electorate whilst in Liverpool, it was 26.1%. Indeed, the mayor of that great city was elected with just 171,176 votes (and for reference, 53,287 watched Liverpool hammer Watford on Saturday).

If that’s not food for thought, I don’t know what is.

So if we are to force action, then it must be done in a way which the clubs are unable to ignore. And in this country, every football fan over the age of 18 has something which those in authority have to take notice of. It’s called a vote.

A few years ago, I suggested the formation of a single issue political lobby group called the Football Party. Initially, the suggestion was that people would stand for their local council to give fans a say in issues that directly affected their local club. It was an approach that proved astonishingly successful in 1990 when supporters of Charlton Athletic FC formed The Valley Party in an ultimately successful campaign to get the club back to their spiritual home.

Such was the response, it quickly became apparent that many supporters believed that this local angle was an idea worth developing. But many people wrote to me and said we had to think big and aim higher. The more I thought about that, the more plausible the whole thing sounded. What finally convinced me that the concept of a national Football Party was a sound one was when I realised that the average local election generates a turnout of less that 40 per cent and that while over 12 million people voted for the Tories in the 1992 general election, approximately 25 million watched the England v Germany semi-final in Italia ’90. What this proved to me once and for all was that if you went canvassing around every pub, club, house and factory, and told the electorate that you were standing to give them a say within the football world, there’d undoubtedly be good support, and as soon as the established parties saw there were votes in it, their policies and actions would change so as to give football a kick up the arse.

In August 1998, when it was first released to the press and various supporters’ groups, the response was amazing. Yet sadly, the people I wanted to react, the football authorities and the government, paid it little heed. Undaunted, I carried on. More support poured in and the manifesto began to appear all over the Internet. I had enquiries about it from all over Europe and as far afield as Australia. It had certainly captured the imagination of supporters. However, the campaign eventually began to take its toll on me, both in terms of time and finances and I was forced to put it onto the back burner. But the idea is still very much alive and the very fact that so many people continue to respond to it proves that it is sound. It sure would rock the boat were it ever to come off.

The mere idea that football fans throughout the country could even consider voting for a fat git like me proves how desperate they are to be involved in the game they love. Every supporter has a role to play in the future of the game, and that doesn’t just apply to the hooligan issue but to every single aspect of football. Every major political party recognises that fact – which is, after all, why Tony Blair does so many stupid photo-calls – but still they do nothing about it. That is not good enough. If football will not provide us with a properly funded platform through which we can be heard and demand answers, then the government must make sure they do. And if they don’t, that’s when we should use our vote, because that is the one thing all politicians are truly scared of. All we need to do is to get organised; but how we actually do that is anyone’s guess.

Yet it has to happen. For only by wielding the immense power we as football fans have at our disposal will we ever see an end to the problems facing football, from the asset-stripping to the financial incompetence, greed and sheer hypocrisy of those who supposedly run our game on our behalf. For too long now they have got away with shafting us. They have placed us in danger, sold our very game from under our feet and in far too many cases to note here, have walked away with bank accounts bursting at the seams with money that came out of our pockets. It’s not right and the time has come to do something about it.

If you want to read more on this, Barmy Army is available to download via this link. There is also more on the subject of football protest movement in my book, Rebellion which is available here.

Two additional plugs, I’m still giving away ebooks versions of two of my best-selling books The Crew and Everywhere We Go. Further details can be found by clicking on the links or here Free Books where you will also find details of all my other publications.

Aside from all that, work continues apace on developing the film version of Wings of a Sparrow as well as the thriller Three Greens and a couple of other movie projects. I’m also working hard on the third book in the The Crew/Top Dog trilogy.

On this most awful of anniversary’s, please take a few moments to remember the 96 souls who died at Hillsborough 23 years ago today.

I’ve written much about that fateful day over the years, much of it admittedly controversial, but the bottom line is that people died simply because they wanted to watch a game of football. Even now those words seem shocking.

Thankfully, we will never see the like of Hillsborough again in this country again and tragic though it was, as a lasting legacy that’s a pretty damn good one.

The other day, whilst listening to the great Adrian Durham on TalkSport I became slightly irritated.

To be fair, TalkSport tends to do that to me these days which is one of the main reasons why I listen to it so infrequently. Indeed,Durhamis one of only three broadcasters on the station whose opinion I actually put some value in

However, I digress. What caused my irritation was a woman who came on to take part in a debate on the issue of safe standing.

Now I have no firm opinions on this matter either way although I do think that the imposition of designated seating has had a catastrophic effect on the atmosphere at games and anything which would kick that into touch is alright by me.

Anyway, the source of my irritation  was a spokesperson (sic) for the Justice for the 96 campaign who came on and gave an impassioned plea which revolved around the idea that a return to any kind of terracing would be a huge slap in the face not only to the memory of the victims of the Hillsborough disaster but to those who continue to fight for justice.

Now as many people will know, I’ve written a lot about Hillsborough over the years and to say that my opinions have not always been universally praised would be something of an understatement. But whilst I have every sympathy for the families of all of the victims, the more I listened to her the more irritated I became. Primarily because she was talking complete and utter bollocks.

Every football fan knows that whatever the causes of the Hillsborough tragedy, it changed football forever and in all kinds of ways. Yet it is a fact that football is an evolutionary entity and to claim that a return to terracing would mean that 96 people had died for nothing is, as far as I am concerned, a genuine insult to their memory.

Because I’ve stood on terraces which were so steep that climbing up them almost required crampons and others which were so packed you could barely breath let alone fight. I’ve stood and watched games through steel bars, been crushed against fences and been treated like shit by policemen simply because I’ve had the temerity to visit their town to follow my team (irony alert I know!). Yet because of Hillsborough, none of those things exist any more.

But just as importantly, the simple fact of the matter is that if people want to stand at games (as they still do in the lower leagues and in parts of Europe) then they are going to, seats or no seats and laws or no laws -and let’s not forget, the 96 who died were, in the main, usually to be found standing on The Kop at Anfield rather than sitting in the stands.

So if we are now able to provide an environment in which the modern day football fan can stand both safely and legally, then we should do it.

For if Hillsborough is going to provide the game with a genuine legacy, safer standing should surely be it.