I’ve spent most of my adult life trying to understand what makes women tick and as I have stated on numerous occasions (and as anyone who knows me will happily testify) I have generally failed miserably. So much so in fact, that in recent years I have all but given up and instead, take whatever flak my ignorance earns with all the humble pie I can consume.

For the most part, adopting this life of bewilderment has turned out to be a good thing. Not least because the older and more childlike I become, the more the mystery seems to deepen and the more interesting women become. However, there are still aspects of female life that bemuse me to such an extent that I have to give them serious thought. One such thing is shopping. And I don’t mean a trip to Tesco’s or even Ikea, I mean a full-on full day clothes shop with the coven.

For years I have struggled to understand why women derive such pleasure from what to most blokes, myself included, is a loathsome activity. I’ve never been able to grasp the idea of spending hours wandering clothes shops or worked out what it is about shoes and handbags that females find so orgasmically fascinating. However, after a recent and extremely illuminating discussion with a female who best remain nameless in the way that ‘whistleblowers’ do, I now think I get it.

You see I suspect we males have been missing a fundamental truth. It’s not that we can’t understand womens fascination with shopping, it’s that they don’t want us to understand it! And the reasons for that are best summed up in three particular words.

The first is occasion. For females of all ages, a trip to the shopping mall with the girls is an event. One where giggling ensues, gossip undertaken and worlds put to rights. More importantly, it is one where men are unwelcome for the sole reason that they inhibit their discussions, behaviour or perish the thought, spending!

The second is escapism. Shopping allows women to step outside the humdrum world of everyday life and become whoever or whatever they want to be for a while. It is, in essence, the same as dressing up when they were a little girl and there is absolutely nothing wrong with that. 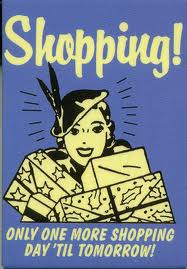 deception. And I’m not talking the kind of self deception women practice when they convince themselves that they really do need, will wear and can afford those Christian Louboutin shoes when they hand over their Mastercard, I’m talking about the subversive thrill derived from deceiving the old man. Be it by hiding receipts, cutting off labels or even throwing in words such as ‘bargain’ ‘cheap’ or ‘sale.’

Thinking about all this has been an interesting experience. Not least because it’s made me understand that shopping is for women what sporting events are for men. And now that I’ve finally woken up to the fact that the old adage ‘what happens on X stays on X’ (insert football, stock car track, stag night, rugby tour as required) which we’ve employed for decades is also being employed by the fairer sex, I am able to look things in an entirely different light. Not least because when I step out of the door and head out with the lads, I won’t ever have to feel guilty again.

A version of this blog previously appeared on www.moanaboutmen.com