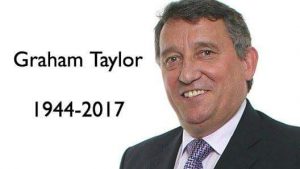 Such sad news and there’s nothing I can write here that will make it any easier to bear.

Graham Taylor wasn’t just a former Watford manager, he was the man who took our little club and built it into the entity it is today. Not once, but twice.

Indeed, amongst the thousands of memories he gave me over the decades following Watford, one of the best was the play-off victory over Bolton which took us into the Premiership for the first time.  Not just for my sake, but for his. As a slap in the face for all those who had criticised him for his time with England, it couldn’t have been any better than that. Not that you would have heard him say that because he was far too much of a gentleman.

RIP Mr Watford. You’ll be sadly missed for sure, but you’ll never be forgotten.

Come on you Horns.