As I have previously stated, I am not an animal lover. Aside from being a source of food, they are as far as I’m concerned, fairly pointless.

Truth to tell I actually find those who do like animals slightly odd. Let’s face it, if you have to rely on a dog (or worse, a cat) for affection then life must be very drab indeed. I mention this now because the other day, I heard a discussion on the radio which referred to the price of tinned tuna and the fact that the price has recently gone through the roof. One of the reasons cited was that fishing for said fish had become more problematic for the poor fisherman because of the need to protect dolphins.

Now as a lover of the odd tuna sandwich (with salad cream and cucumber obviously), I immediately questioned the reasoning behind this but before I could say anything, the interviewer responded with the point that dolphins have to be protected because they are very intelligent and have an IQ in of over a hundred. I’m sorry, but unless turning up and making a few clicking noises, giving the examiner a smile and a nudge with your nose is on the test system at MENSA, this is clearly bollocks.

If dolphins are that clever you would have thought that by now they’d have realised that if they see a couple of boats moving along on the surface being followed by a wall of fish swimming in a ball, it’s a good indication that there’s a net involved so it might be a good idea to give it a swerve. The fact that they haven’t speaks volumes to me.

Inevitably, this led onto another question and that’s that since dolphins look quite meaty and there are obviously loads of them around, why don’t we eat them?

Leaving aside the vegetarian issue (and trust me, you really don’t want to get me started on veggies) the answer of course, has nothing to do with their so-called intelligence and everything to do with the fact that they are cute. Which is exactly the same reason people use for not eating dogs, cats or even monkeys (although if you type ‘monkey rapes frog’ into Google you will soon question the validity of that statement!)

Now I might not have the IQ of a dolphin (sic) but there is certainly a lesson to be learnt here. Not by me, but by the 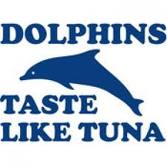 pig, cow, sheep and poultry community. Because if humans only eat cute animals then it might be a good idea to get working on a bit of evolution in the beauty department. In the short term a trip down to MENSA might not be such a bad idea either.

Just make sure you practice those clicking noises first! After all, if it works for flipper, it’s certain to work for you guys.