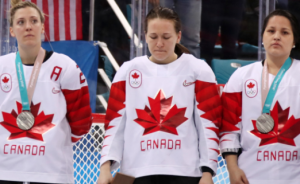 Like everyone who saw it, I was gripped by the women’s ice hockey final at the Olympics. It was an astonishing event played by two teams at the very top of their game.

Sadly, the event has been overshadowed by what happened during the medal ceremony when one of the Canadian players, Jocelyne Larocque, took off her silver medal within seconds of if being placed over her head.

This was, according to many, disrespectful, petulant and even childish behaviour of the type we should never expect to see from anyone representing their country. Well I’m sorry, but they are wrong. This is EXACTLY the type of behaviour we should be hoping to see from our top flight sportsmen and women.

Let’s be clear, in team sports you don’t win a silver medal, you lose the gold. This is especially true at the top flight and even more so at an occasion like the Olympics in a tournament where you are expected to win gold. But when you don’t win but instead, lose in the final to your fiercest rivals and in the cruelest possible way, are you supposed to stand there and actually be happy about it?

In the cold light of day, maybe Jocelyne Larocque would have done things differently and indeed, she has since apologised. And yes, arguments that she is a role model and should be proud to represent her country at the very highest of levels all have some validity.

But in that moment, when her dream had been snatched away and the agony of defeat was clearly uppermost in her head, tearing off that medal showed just how much she was hurting. That, to me, is exactly the kind of passion I want to see in each and every sportsman or woman representing my country -and my football team come to that!- because I want them to win and win big!

And when they don’t, I don’t want to see smiles and handshakes, I want to see agony. Because that’s how sporting legends are made.

I desperately need to do some work on my Amazon author page , primarily by adding some new titles to it! So I’m happy to pass on news that there will be at least two, maybe even three new ones coming in 2018!

In the meantime, you can buy all the existing books including the soccer comedy Wings of a Sparrow and the #1 thrillers,The Crew and Top Dog from either Amazon or iTunes.