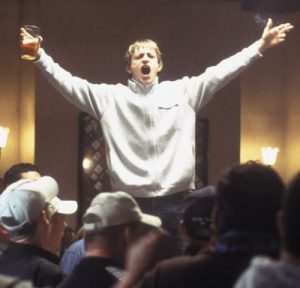 I was asked this morning how I come up with names for my characters and since I haven’t blogged for a while I thought it might be an idea to kill two birds with one stone by writing something about the process of creating characters and how I go about it.

It is important to stress from the outset however, that this is my process. As I’ve written many times before, I have never studied the craft of writing and so have no idea if there is a standard ‘way’ or not.

For me, character development is actually one of the most fun parts of the writing process because it allows me the opportunity to play god. Given that it’s fairly certain that he and I will not be meeting in the afterlife as I’ll almost certainly be heading south, it’s an opportunity I tend to relish for all kinds of reasons. Revenge being just one.

So, when a character makes an appearance in my psyche for the first time, be it in a novel or a screenplay, the process always starts with the same thing, the story. Be it tightly or loosely plotted, it is vital that you, as the writer, have some idea of the journey you’re going to take your creations on before you start actually putting them together. Once you have the bones of that, then you can start putting on the flesh. It is however, important to understand that to all intents and purposes, your characters must be real in every sense of the word. They must have histories, personalities, flaws and fears and it’s up to you, as the writer (god), to create those.

For me, the first stage of that process is to give each of them a name, a face and a voice. The name is the easier of the three because all it has to do it fit the individual and the world you want them to inhabit. Can you imagine Billy Evans being called Tarquin Selby-Green? Of course not, it would never work. Billy is short, sharp, blokey and slightly cheeky so it was perfect for the main man in both The Crew and Billy’s Log.

I also wanted the christian names to be short and punchy. Evans was my former agents name and Billy Evans rolls off the tongue. Simple as that. But in the past I’ve found names for my characters simply by scrolling through Facebook and finding something which I think fits.

However, whilst a name can be changed fairly easily, usually with a few clicks of a button, the face and the voice are far more important because as you spend increasing periods of time with these imaginary people, they will fairly quickly come to haunt your consciousness. Key to both of those are their appearance.

When a character first appears in your head, he or she will inevitably have a certain look and to stay with Billy Evans as an example, he was no exception. From day one he was medium height, stocky, dark haired and had a cheeky face. In essence, like any one of a hundred lads I know. I also knew immediately what I wanted him to sound like and so once I had the plot tied down, I went looking for him.

Oh yes, every character in everything I’ve ever written is based on a real person an in the case of Billy Evans, it was a mate. However, it could just as easily be someone famous who I may or may not have ever even met and I do that for a very specific reason. If I ever find myself struggling, I can either ring up that person or YouTube them. Trust me, it’s amazing how quickly and easily a quick chat or a short video clip can free up the mind and spark something off.

Of course, as work progresses the characters begin to take on lives of their own which is exactly as it should be but as a starting point, basing them on real people certainly works for me and in all honesty, that’s all I care about!

It has recently been commented upon that I have been fairly quite of late. This is not however, because I have been suffering from the mythical writers block not have I retired. Far from it.

In fact over the last year or so I have worked on three movie scripts (two of which have nothing to do with either football or criminals) as well as what could be an extremely controversial TV drama. Having thrown all of these into the commissioning pit over the last few weeks, I am now back working feverishly on the third book in the The Crew/Top Dog trilogy which is thankfully, heading toward completion.

More news of all of these as and when!