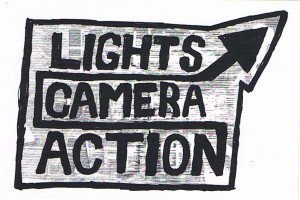 First off, I must apologise for the title of this blog.

The truth is, as a simple writer I am but a tiny cog in the movie making machine and if I did genuinely know how these things happen, I’d have bottled it, patented it, franchised the shit out of it and be long gone by now.

What I do know however, is how mine happen although to be fair, my experience is hardly standard. My first, the now infamous Green Street, came about as a result of a conversation on an internet forum whilst my next one (that will be #4) is the product of an idea my co-writer first had decades ago but could never make work until he had the quite brilliant idea of asking me to help him.

This proves to me, and should do to you, that there is no actual ‘way’ for a movie to happen but there are instead, a myriad of ‘ways’. And for the average writer, most of those will be entirely out of your control and more often than not be almost entirely dependent on huge amounts of luck. Sad, but undoubtedly true.

That said, there are plenty of ways to heighten your chances of escaping the anonymity of the slush pile although in truth, none will ever guarantee success.

For a start, turning in a script which is both properly formatted and free of either spelling or grammatical errors should be a given (and if you don’t do that anyway, then you don’t deserve to have your script even read let alone produced) whilst having a decent title certainly helps. Attaching a star is also a great way to gain attention but all of this should be the territory of your agent or manager if you have one. On which note, if you don’t, then get one. They are effectively filters who keep crap away from script readers and so a pile of paper coming from an agent is going to have far more of a chance of being looked at and taken seriously than one that doesn’t.

If you’re not adverse to networking (and I am, I hate it) then get out there and sell yourself as often and as hard as you can because in the film industry, people buy people as much as they buy what they can actually do. If you can’t or won’t do that and aren’t getting anywhere via any other means, then entering any of the numerous screenwriting competitions may well increase your chances of getting your work in front of the right people.

And that’s what all about; placing your work in the hands of someone who will hopefully read your script because that’s when it all turns back around and becomes all about you. Or rather, what you’ve produced.

That brings me back to one fundamental element of your script and it’s the thing you have the most control over, the story. Because whilst a great story will sell a crap script, a crap story won’t sell a great script.

So nail your story from day one and if you do the work and get it right, it’ll increase your chances markedly.

On which note, for reasons which will become obvious in the fullness of time, details of my next project are being kept a closely guarded secret but rest assured, I will pass them on as soon as I’m allowed.

What I can tell you is that it’s going to be a cracker and is certain to shock a few people. Well, hopefully more than a few.

And that’s all you’re getting for now.

Oh, one final thing; for those waiting for the third book in the The Crew/Top Dog trilogy, it’s almost finished and if I’m honest, it’s shaping up to be the best of the three. Patience my pretties!!