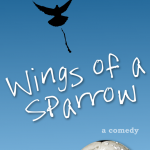 A lot of people have been contacting me recently to ask if my football comedy novel, Wings of a Sparrow is ever going to make the leap from book to screen. My response is always the same, I’m working on it. However, the truth is that whilst I continue to push it as much as I can, the next step isn’t really up to me. I wish it were.

In an ideal world, I would write a script, show it to someone and they would hand me a few million pounds to get it made. Better still, they’d buy it off me and I could sit back while they did all the hard work. However, it doesn’t work like that, not for me anyway. Instead, like hundreds if not thousands of other scripts, Wings is having to go through what is called ‘the pitching process’ and since I suspect that many of you don’t understand how that works, I thought I’d put together a layman’s guide and tell you where my baby is currently sitting.

1. You write a script. – Done. Both film and TV versions have been written together with various outlines ranging from two sentences to 15 pages. Plus there’s the best-selling novel of course.

2. You send it all to your agent who identifies those production companies who might be interested and sends it out to them. – Done.

3. You wait. And wait. And wait. In the meantime, you network the shit out of it and maybe attach potential cast members or even a director. If you can add a well known name, this is a huge plus. – Doing.

4. If you’re lucky, one or two (from up to ten or even more of the companies it will have been sent to) will actually come back to you and say that whilst they like it, it’s not for them. This is normal as many production companies will only be looking for certain types of films although in many cases, some of the reasoning for the rejection is questionable (but never open for discussion). ’Football films don’t ever work’ being the most irritating response we’ve had to Wings. – Done.

5. You wait some more, and possibly follow up with those who haven’t responded. You also send it out to more potential producers and maybe a director or two. Then you wait, again. – Done/doing.

6. You give up pitching it and go onto the next project in the hope that one day, someone will possibly stumble across it and like it enough to show interest. – Pretty much done.

And unless someone actually comes in with an offer to either option or make it, which can be at any point in the process or the future, that’s the brutal and frustrating reality of how it works for most of us. It’s even harder for those writers who have never had anything produced because you have no track record to back you up. However, we all know that and as I’ve said many times, if you don’t like it, don’t do it.

Do I think that Wings would make an awesome and very funny low-budget movie? Of course! Do I think it would work on TV as either a two part comedy drama or even a sit-com? Too right!  But what I think doesn’t matter. It’s all down to what a person sitting behind a desk at a production company or studio thinks and more importantly, what they are looking for at that moment in time.

For whatever reason, Wings of a Sparrow isn’t it. Yet.

PS: If anyone in the business would like to have a read of the script, please drop me a line at dougiebrimson@me.com

Just in case you didn’t already know, all my books and DVD’s are available from bothAmazon and iTunes.